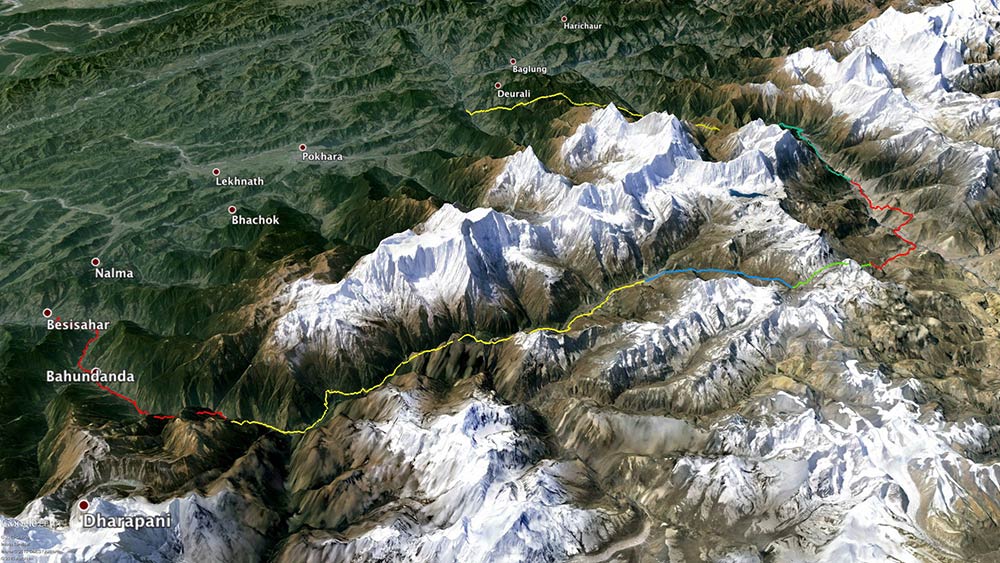 The route represented in Google Earth.

This is the staged trail race around the Annapurna Circuit, largely following the off the beaten track ‘New Annapurna Trekking Trails’, that we’re excited to be running in collaboration with Seth Wolpin and Wide Open Vistas.  Right away, here are some facts and figures:

Here we ask some questions of Seth who’s in Kathmandu having just completed some work for Wide Open Vistas, the charity organisation he is part of, which aims to offer educational opportunities in Nepal.

How has the Annapurna Trail Race been affected by the earthquake?

We have reports that buildings have seen little damage compared to the earthquake affected areas to the east. We also have reports that the trail system is still in good condition. We are confident that over the next three months conditions will settle down and that locals along the circuit would certainly like to see trekkers return to Nepal to help with tourism revenue and rebuilding. The event has caused us to re-tailor this race so that it becomes a fundraiser to help communities on the circuit as well as elsewhere in Nepal. Proceeds will go to Wide Open Vistas and other vetted charities in Nepal and we will help runners set up their own fundraising pages too if they like.

What are the key things you love about the Annapurna Trail Race?

I love the villages, people, and views along the way. Annapurna has been considered one of the top ten treks in the world. Lately jeep track building has had it fall out of favour – but many people don’t realize that there is a whole set of wonderful alternative trails that take us someway back to the famous Annapurna trek of old.

I love that. I also like how we finish so close to Pokhara. It makes for a great after party!

So the Annapurna Circuit has a road now?

That was my fear when I returned to the circuit last year after taking a few years off. But I was relieve to find it isn’t. There are many opportunities to run on alternative trails and stay away from the jeep track.

Yes – there are a few sections where we need to be on road – but the vast majority of the time it will be a non-issue as we will on opposite sides of the valleys from the tracks.

The ‘New Annapurna Trekking Trails’ are great. Trail marking are great and easy to follow, the views are fantastic. We actually rarely saw other trekkers when we were on these trails, I think a lot of trekkers want to just bag the pass so they take a jeep as close as they can, go up and over, and try to get out from Jomsom. I won’t judge them – but it makes for a lot more solitude and serenity on the trail!

The timing, why is it good at that time of year?

The last two weeks in September are perfect because it is the tail end of the monsoon so we will see very few trekkers.

There can be clouds for sure – but they can be beautiful in their own way dancing around the mountain tops. This will be my sixth time to Annapurna during the last two weeks of September and I’ve never been disappointed. It is also prime apple harvest and we will run through some great orchards.

Why did you put a 50km race in there.. why not every day?

We want to have a unique format for people – this will be a small group cultural run. A fast pack.
There are a lot of fit, active people who want to do the circuit but don’t want to do an organized tour
which are usually relatively slow. The message here is quick and light – but not racing so we have time to stop and smell the roses, see the temples, meet the locals etc.

But we also want people to experience what it is like to run hard in the mountains and maybe even get a little competitive. So that is why we worked a 50k stage into the circuit. It will also be after the pass so we won’t have to worry about altitude issues and we will finish at a wonderful hot spring.

Your favorite part of the trail?

I love the section from Marpha to Tadapani. This is the same section that will be the 50k race. We are running on great trail above the Kaligandaki River for much of it – through small villages and with some great scenery.

There are some trails connecting Muktinath to Kagbeni which go through two Tibetan villages. This route isn’t part of the NATT system (for some reason that has people following the jeep track). I love
this section because it is basically lower Mustang and the landscape is amazing. Technically it is jeep track but I think some washouts have made it unnavigable. I’ve never seen a jeep on it and also never seen another trekker on it.

And one last one…?

There is another great section we will do that is way off the beaten track. It is mentioned in the NATT guidebook but not part of the NATT system. We go through a small Tibetan village and climb a little pass before dropping down into Jomsom. Great views, a descent that will get your heart pounding!

What about the Annapurna Circuit Fastest Known Time – how big a challenge is it?

It was big! I’ve never tried to push myself that hard. My Everest summit push was about 35 hrs and this was twice as long. Of course there are big differences between the two – but trying to move at altitude for that many hours is hard and I wasn’t super trained. It had been over a year since I ran my last 100 miler. It was also the first time I had run through the night (actually two nights) solo and that was interesting. I loved it though and hope to try again this year after the fast pack and hope others will join me.