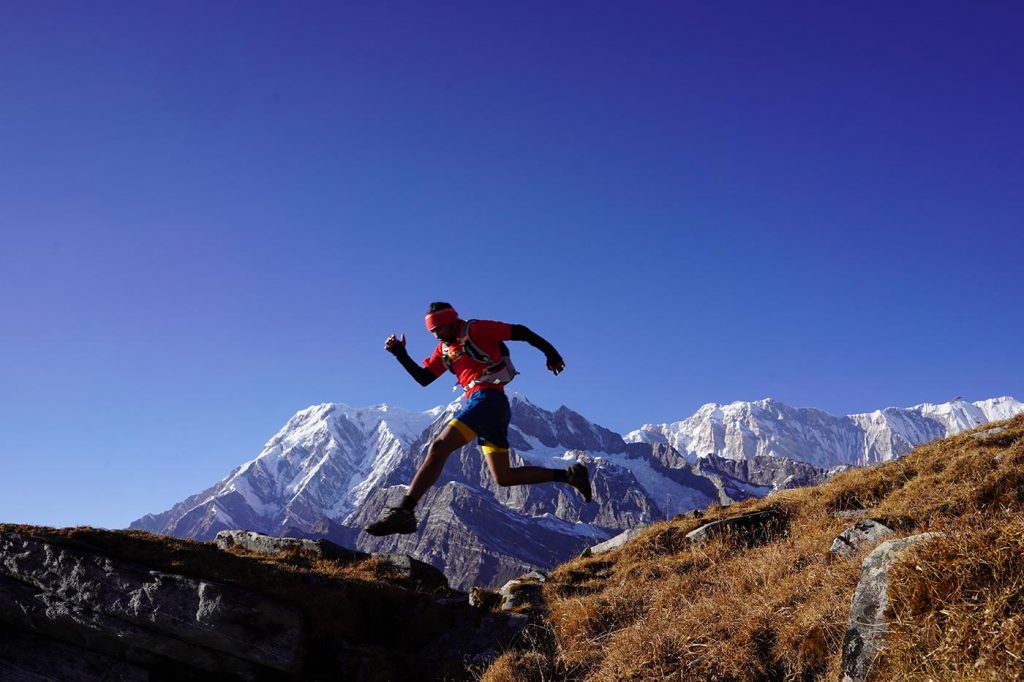 Jagan Nath Timilsina comes from the village of Sarangkot in Pokhara, Nepal.

He started his career as a load carrying porter in the tourism sector in 1998 at an age of 14. Slowly he worked his way up to be working as a trekking guide and then later, as a mountain guide.

In 2015 he established an adventure company specializing in trekking and mountaineering Freedom Adventure Treks, which employs 25 seasonal and permanent staff, and has since operated trips for almost 2500 clients sourced from four international parent companies based in the US and Europe.

Jagan has learned that it pays to dream big. After the expense and logistics of expedition climbing, Jagan discovered the simple pleasure of light and fast trail running.

In 2017 he entered his first race called The Great Himal Race that runs across the high Himalayas from Kanchenjunga to Mount Kailash in Tibet.

This motivated Jagan to start a second business – Himalayan Trail Running – a company focused solely on organizing trail running races and trips. Himalayan Trail Running has been commissioned to organize several international races in Nepal, including the 2019 Golden Trail World Series Final, the Annapurna Mandala Race and Everest 135, a 135 mile race in the high altitude region close to Mount Everest.

In 2015, Jagan founded the Freedom Social Foundation, a charity with the aim of helping young and particularly less-advantaged children experience and learn from the outdoors.

In 2019, Salomon, the main sponsors of the Golden Trail World Series donated €5000 to the Foundation. This financial boost funded a series of special outdoor training camps such as the one shown below. Greg Vollet, the International Marketing Manager at Salomon in France, said, “We are really happy to see these images. You make our day … that we are helping this make to happen!”