Runner to break own 3-day record for 319km Everest Basecamp to Kathmandu run.

British endurance athlete Lizzy Hawker to arrive in Kathmandu from Base Camp on Saturday evening.

At 7am on Thursday 18th April internationally renowned endurance athlete Lizzy Hawker began a solo run in the direction of Kathmandu some 319km (198 miles) away.

She is the world record holder for the ‘Everest Mailrun’ the route taken by those carrying letters to and from expeditions at Everest Base Camp before the opening of Lukla airstrip in 1964. 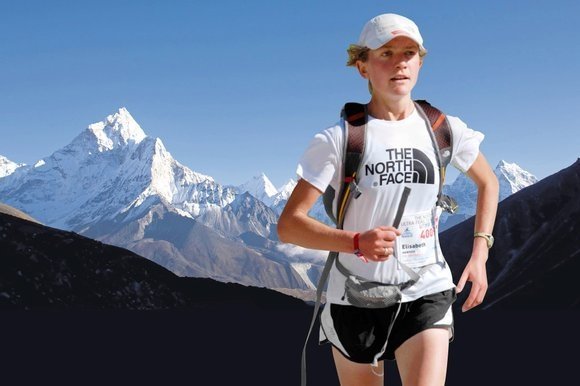 Her record stands at 71 hours 25 minutes, completed in November 2011. She made her first attempt of the run in 2007 with two friends which took 74 hours 36 minutes with just 4 hours sleep in Jiri.

The last Nepali runner to hold the record was Kumar Limbu in 3 days 7hrs and 10mins set in May 2000.

Hawker, who was named a National Geographic Adventurer of the Year 2013, won the 100K world championship in 2006, set a 24-hour world record by running 247km at the Commonwealth Championships in September 2011, and set a course record for women in the 250km Spartathlon Ultra Race in Greece last year.

“I try to focus on running the very best that I can, literally moment by moment,” Hawker recently told the New York Times,  “If I’m in pain or tired, I don’t have to fight it. I can be in myself, in the environment. It’s amazing what you can do running moment to moment.”

Hawker fuels herself on simply banana cake and cheese sandwiches and likes dal but prefers roti to rice.

She is expected to reach Jiri at 4pm Friday and reach the Rangashalla stadium late Saturday night 65 hours after starting at Base Camp.

Earlier this year The North Face sponsored athlete won the 100km Annapurna 100 race and will race the multiday Mustang Trail Race later this month before then going to compete in the 24 hour World Championships in The Netherlands in mid-May.