Thanks to Roger Henke for permission to repost this from his excellent blog. Roger was director of the Summit Hotel and did a huge amount to promote trail running in Nepal through the Annapurna 100 race with Ramesh Bhattachan, and by exploring and plotting endless trails and sharing them on Everytrail.com. 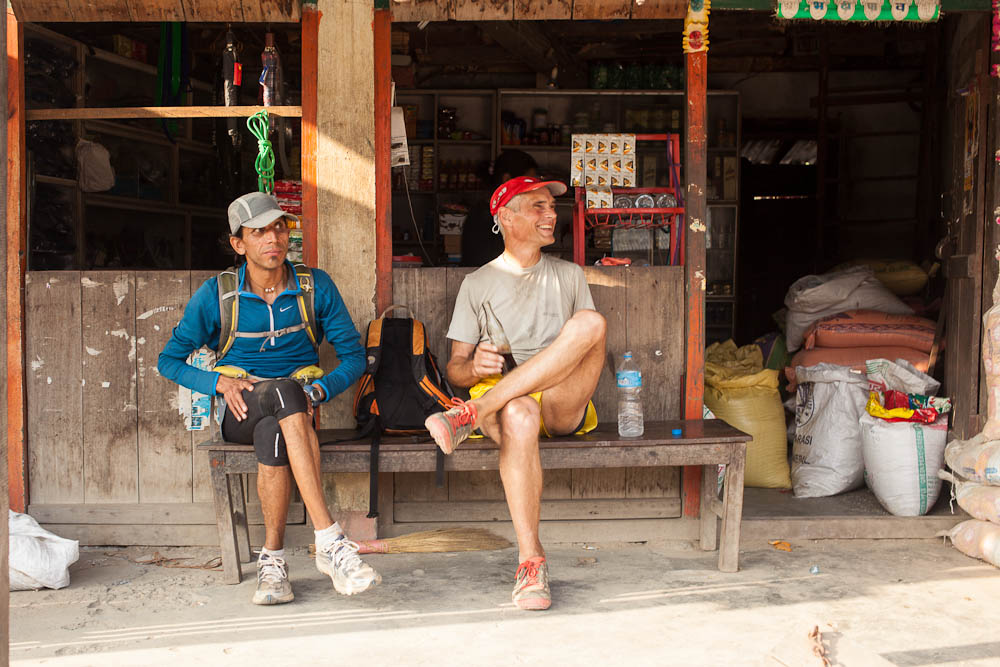 Roger Henke on his ‘last’ trail run in Nepal in 2012. Narayan to the left.

Looking back on 2013: trailrunning in Nepal

When I suggested to Richard Bull that he do a review of 2013 for trailrunningnepal.org I could have known what would be his answer. No-brainer really, and had he asked me first I would have done the same. So here’s my reflection on another good year for Nepalese runners, Nepalese trails and Nepal’s place on the international trailrunning map.

This was a good year for trailrunning in Nepal. More races than ever. Still near-all of the multi-stage version, but the country is uniquely suited for that format so one can understand why. It’s also the format that has the longest history, is easiest to turn into commercially viable events and gives participants maximum trailrunning for their not-so-cheap ticket to Nepal.

The performance of one Nepalese runner stands out : Upendra Sunwar. He won a staggering four multi-stage races in 2013. Starting off with the not-so-surprising win of the Mustang trail race in April/May, his win of the Oct/Nov Himal race, 745 kilometers in 21 days (+34100m, -36000m), and the Everest Sky race (basically the second part of the Himal race but bringing in a fresh group of runners) proved his exceptional skills at this endurance discipline. Without a break he moved on to the six-stage Everest Trail race and won that with a stunning margin too.

The Himal race (next edition announced for 2017) is in a class of its own. Its extraordinary length, not only many days, but most of these days being very long, the many altitude meters to ascend and descend every day, the many hours above 4000 and even 5000 meters,  and the requirement to carry all your own gear, make for a combination that is unique in international trail running. This is certainly Nepal’s most iconic race, and merits much more recognition than it receives.

No new one-day races this year but I’m told 2014 is going to change that so keep your eye on trailrunningnepal.org  and its facebook page.

Nepalese runners are still not very visible on the international stage, but the trend of the last couple of years for at least some opportunities for some runners to enter races abroad* starts to make the raw potential a bit more widely known. Ultimately, what really counts for such visibility are podium positions in big races with a strong international field. This year’s win of the Oxfam Trailwalker by a Nepalese team in the first ever below 11 hours time in the 27 year history of this 100k team event certainly qualifies. Another Nepalese team were runners-up, just minutes behind the winners, having battled for first position for nearly the whole race.  Nepalese runners scored podium positions in two other 100k races in Hong Kong this year, including first place in the new Lantau 100, and had a female as runner-up in the 50k distance in that race. Aite Tamang came in 13th in this year’s UTMB. It’s probably going to take a podium position in a race of that even-bigger-than-trailwalker caliber for any Nepalese runner to get an offer from any of the major “teams” (Salomon, Northface, etc).

Ultra-trailrunning is developing very fast with, many more races every year, many entering the sport every year,  and younger athletes with faster road (marathon) times on their running CV switching to the discipline in greater and greater numbers. So it is becoming more difficult every year, for everyone, but for those without professional support in particular, to achieve podium position in any of the iconic races. With some exceptions, because Nepalese runners have specific strengths that should give them an edge in particular races. One of these strengths is their abilities above 3500 meters, but that’s not all that relevant outside their own country. Another is their speed in descending steep, very technical trails. With the opportunity to join races that are best for them, I’m sure that one of those Nepalese running internationally is going to follow in Dawa Dachhiri Sherpa‘s footsteps in the coming years.

Aite Tamang with friends in Chamonix for the UTMB
source: https://www.facebook.com/trailrunningnepal

Apart from the numbers of participants, and their capabilities, there are two other noteworthy developments in ultra-trailrunning. One is the increasing popularity of setting a Fastest Known Time (FTK) on a particular route (that is not a race route).  The other is the trend towards longer and longer courses.  Races beyond 100k and especially 100 mile have been around for quite some time but were limited in number, and considered emblematic but fringe events for the elect few. But in recent years theSpartathlon and Badwater classics are being joined by more and more mega distance races some of which attract larger numbers. The UTMB organization has added a 306 km team event, la Petite Trotte de Leon, to the distances it offers, there is the hugely popular 330k Tor des Geants in the Val D’Aosta in Italy, and new 200k+ races are emerging on the running calendars of the UK and Germany.  Not to forget the La Ultra – The High in Ladakh, that is upping the ante by adding a 333k distance for its fourth edition in 2014.

In light of the above I feel that Lizzy Hawker‘s FTK efforts on the 319k Everest mail runroute are under-appreciated. In 2013 she shaved another 8 and a quarter (!) hours off her existing FKT on this route, bringing it down to 63 hours and a bit. This extraordinary achievement sets a time to beat on one of those few FTK routes that have real international potential. Most of those routes only attract the local community. That community might be quite big (for routes like the rim-to-rim(-to-rim-to…) of the Grand Canyon e.g.) but never “the world”. The Everest mail route,  does have that potential and Lizzy now set a time that is as sharp as it gets as a target for any male and female international elite ultra-runner.

Fabulously strong support for Lizzy from Upendra Sunwar who guided Lizzy across country through the night and on the final difficult hours on the way back into Kathmandu. This photo was taken at 3am trying to decide if they’d found the start to the cross-country route to Mude (@ Richard Bull). 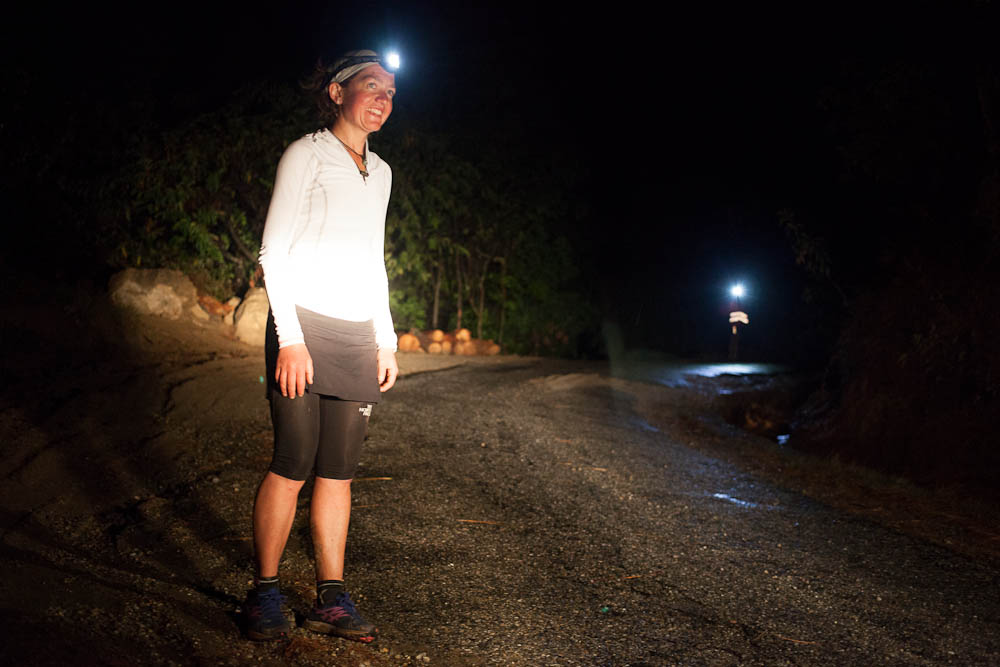