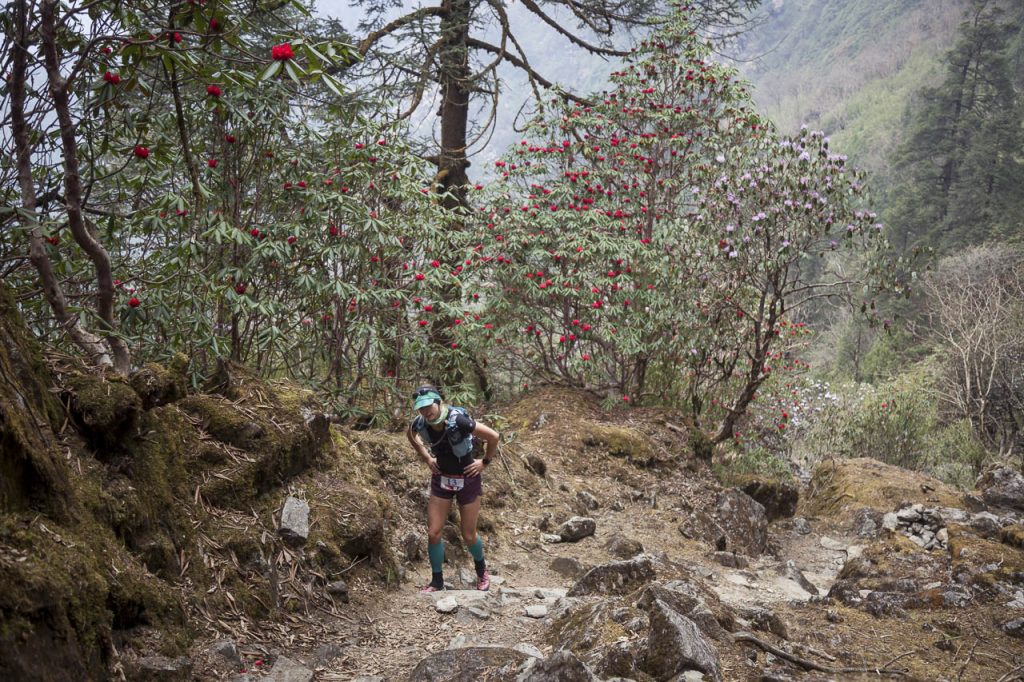 Nepal is famous for its mountains. Some of its mountain ranges are famous for their lakes. Gosaikunda lake is a sacred place nestled in the Langtang National Park. Thousands of Hindu pilgrims ascend to the lake at 4380 meters to receive their ‘sacred thread’ during Janai Purnima festival in August. The rest of the year, the lake lies still and calm, visited by trekkers, fewer in number than those found on the main trails such as Everest Base Camp. On 10th May 2019, 25 trail runners made a pilgrimage of s(p)orts to participate in the inaugural edition of the Gosaikund-Helambu marathon.

The fun began before race day – an event of this altitude requires a day or two to acclimatise, so many of the participants arrived at the start line in Cholong Pati, 3330m, by Thursday evening, having hiked together from Dhunche, via Sing Gompa. We enjoyed a communal dal bhat together in Cholong Pati before getting an early night. Friday was a ‘rest’ day – many of the group decided to use the time to hike to Gosaikund to acclimatise and to view the jewel of Langtang Lirung. 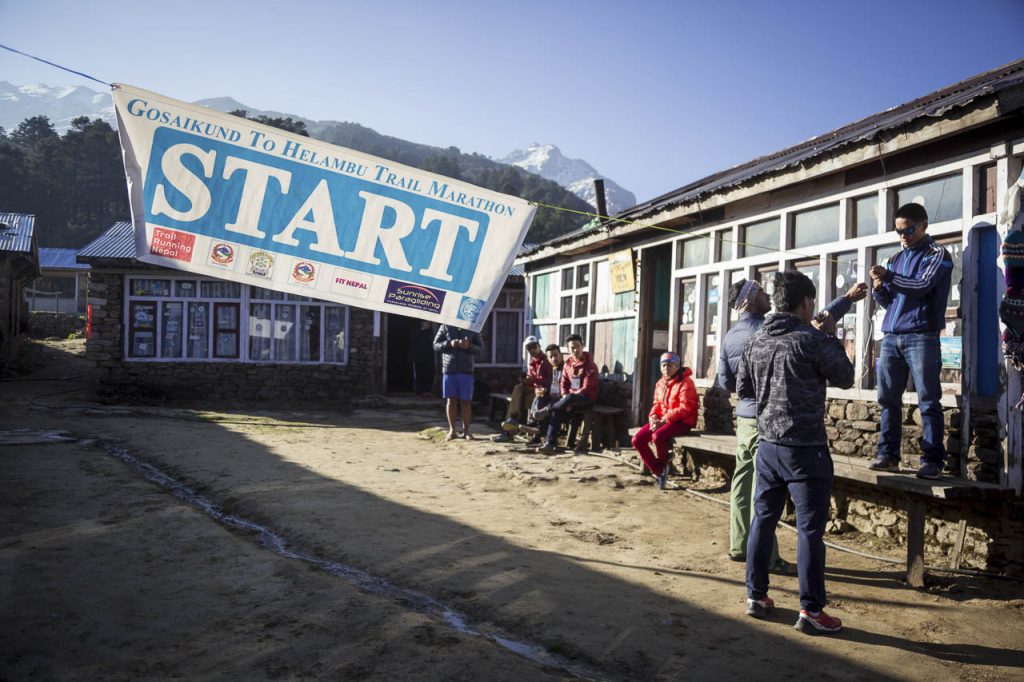 The race started on Saturday morning at 6am from Cholong Pati and immediately began with an ascent towards Lauri Binayak. The sun rises late above the mountains, so the power-hike up was a welcome warm-up, although I was glad of my gloves to keep my fingers comfortable. After topping Lauri Binayak, the path down to Gosaikunda lake (and the first checkpoint of the race) was enjoyably runnable. The atmosphere at the first checkpoint was supportive, and tourists, getting ready for their day of trekking after sleeping at Gosaikunda, were there to cheer us on, too.

Drinking in the views of Gosaikund lake in the early morning light provides ample spiritual energy for scaling Lauribina pass at 4610m, although leaving the first checkpoint with a belly full of biscuits and a Snickers clutched in your fist is advisable. It’s not a particularly tough pass to climb, you just need to keep on stomping up. In 2019, there was a little bit of snow on the pass, but not enough to warrant use of micro-spikes, just a little caution. No checkpoint at the top of the pass, but volunteers perched to monitor runners’ progress and offer assistance if necessary. After Lauribina pass, there is opportunity to switch your muscle usage up as you dance down a slightly technical trail towards Phedi, the second check-point. 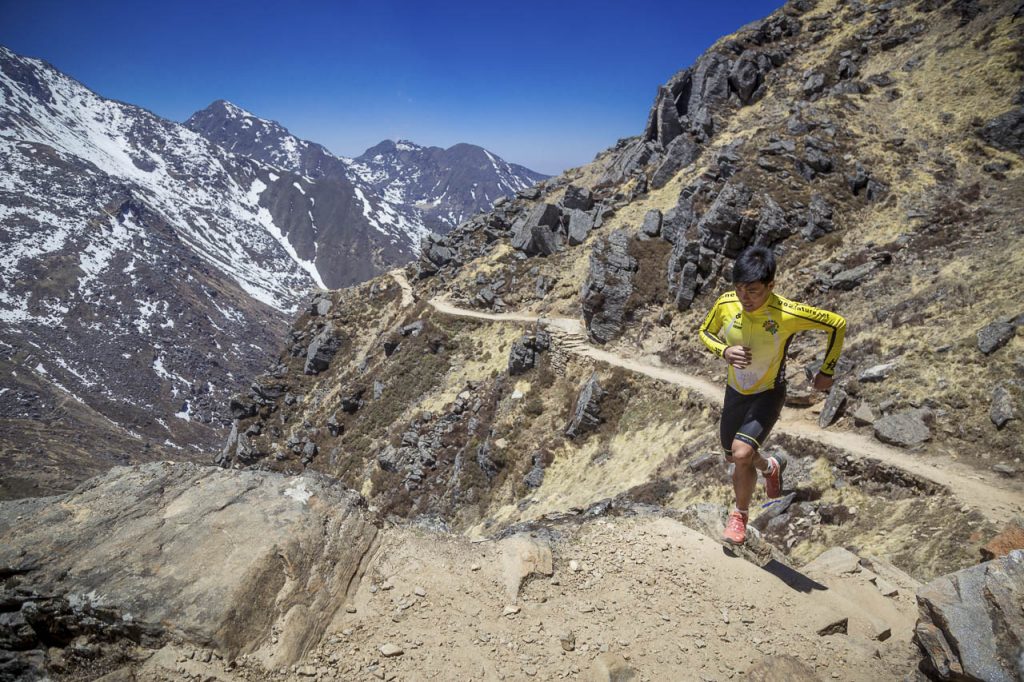 I examined the race route prior to race day and decided that the only ‘serious’ climb of the day was Lauribina pass; after that it was all downhill or ‘mountain flat’ to the finish line at Meramchi. However, the route is slightly technical for most of the duration – which requires quite a lot of concentration and careful footing. This doesn’t seem to slow down the amazing Nepali runners at all, but for those cautious of accruing large dental bills through face-smashing rocks, progress was slower than I expected. Also, after putting my all into getting up the first climb to Lauri Binayak and then the second, tougher climb to Lauribina pass, my uphill leg muscles were spent. 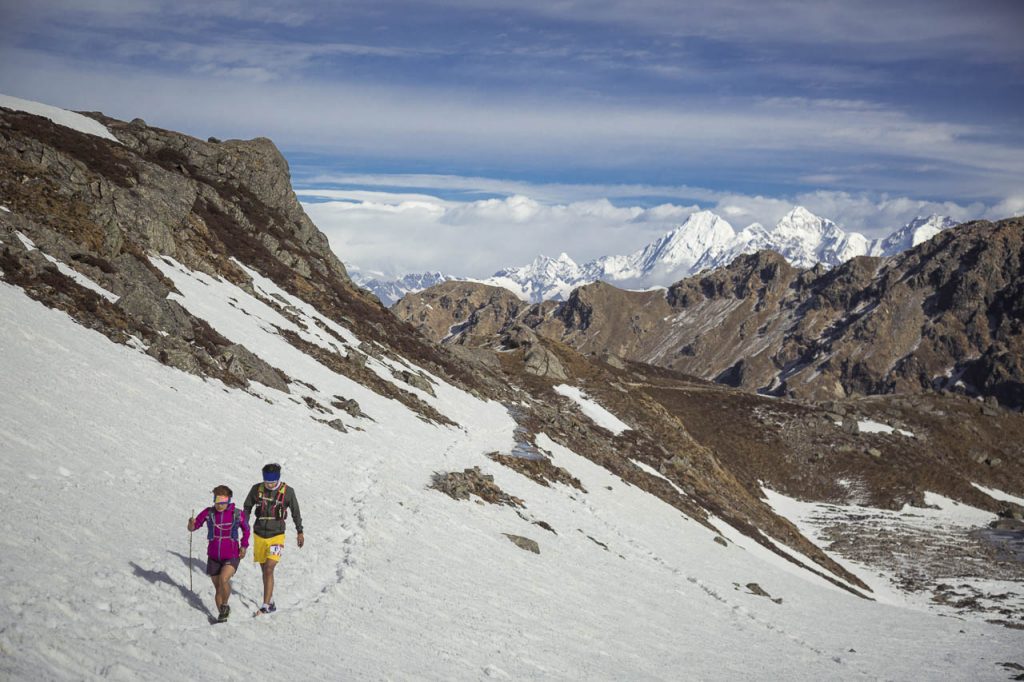 As a result, progress to the third checkpoint was slow for me – it took me about 4 and a half hours (I think) to get to the 21 km mark at Thadepati. Incidentally, this is also where I spent the night whilst trekking the same route a few years ago, after overnighting at Gosaikunda. So, there were some mental hurdles here -pushing on beyond what I had considered at the time to be a ‘tough day’s hiking’. I overcame these stuffing biscuits into my mouth and looking around at the scenery – such a privilege to be ‘racing’ in these mountains, and the slower the pace, the more time to enjoy the rhododendrons in full bloom, right?

Revived by noodle soup and the humble pie of being slow, the 4th checkpoint at Ghopte seemed to come around much faster than expected; mostly flat and reasonably runnable, with some small stretches requiring some caution due to rockfall etc. Ghopte features lodges decorated by debris from the ill-fated Thai Airways 311 flight, which crashed into the mountainside in 1992. If the wide open skies and soaring mountains don’t remind you of your own mortality and the need to live life in the present, then drinking reviving, sweet tea amidst mementoes from a plane wreckage will.

The trail continued with ‘mountain flat’ – a little up, a little down, runnable if you’re confident on rocky terrain. My progress resembled more of an inefficient dance, but it’s not a competition (unless it is a competition) and I enjoyed the descent from exposed mountain paths into forest, passing stupas and the remnants of civilisation: earthquake devastated lodges.

Bananas awaited at Kutumsang, the 5th checkpoint, where villages gathered to place a khatta around participants’ necks. Kutumsang marks the return to ‘civilisation’ after being on the high trail all day. After Kutumsang, the trail veers off from the standard Helambu trekking route, through villages and rice paddies towards Meramchi. The final stretch of the race is mixed terrain and very enjoyable to run on. The last 2 km are downhill on jeep road. I was glad I had refilled my 2 litre bladder at the 5th checkpoint as the final section of the race descended quickly and as a result, the temperature increased dramatically. 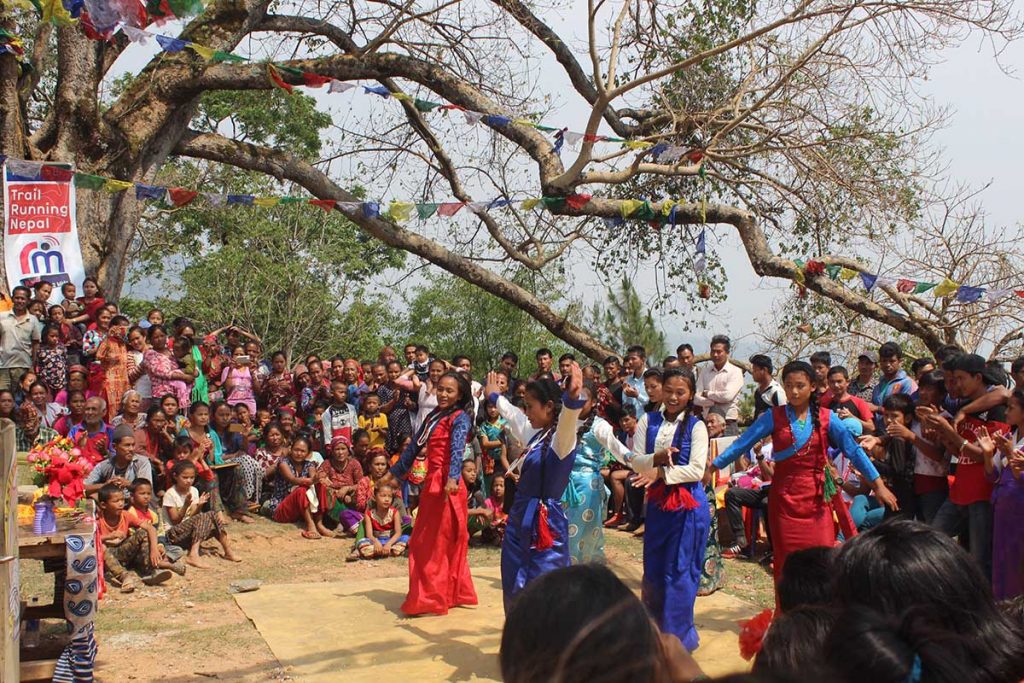 A real festival atmosphere awaited in Meramchi – where practically the whole village was out to celebrate the runners finishing. Many were decked out in traditional Tamang attire. I declined the invite to join in the dancing as my quads were wrecked. Instead, I enjoyed some delicious home-cooked bean soup (two bowls – thanks, it was tasty and I had an appetite), a shower and clean clothes from my finish bag, which was sent directly to the finish line from Kathmandu. 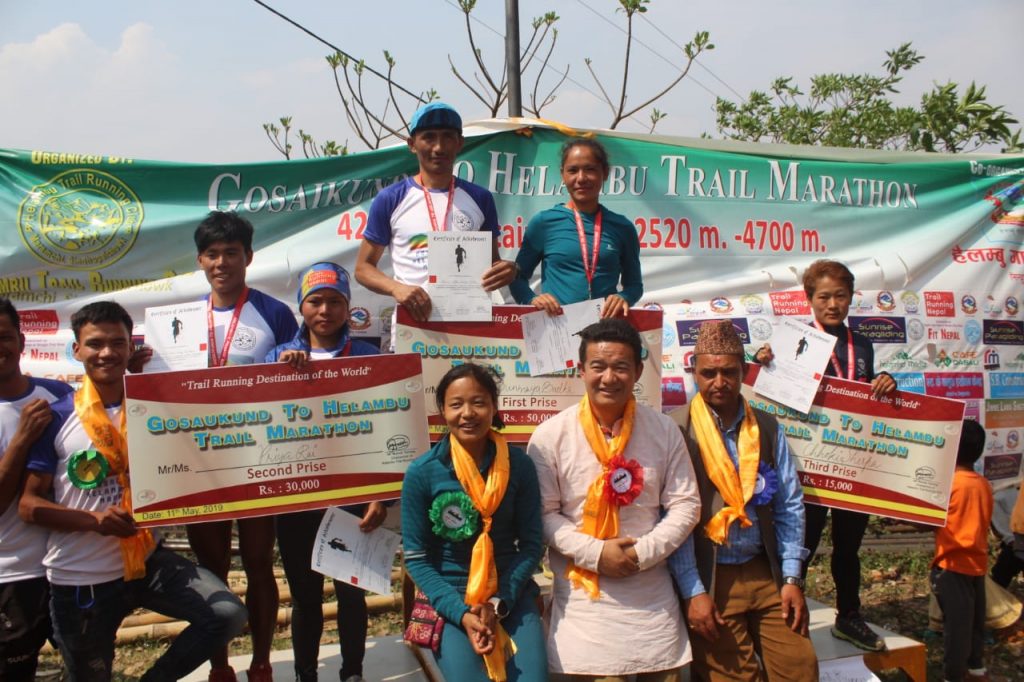 If you enjoy the challenge of flying down slightly technical trails, this is the race for you! Or, if you like a full day out in the mountains. An excellent way of participating in this race would be to use it as a ‘finisher’ by combining it with another trek in the Langtang national park, for example the Tamang Heritage Trail or a hike up to Langtang village. Some participants did this and joined us the day before the race at the start line in Cholong Pati. Depending on speed, Tamang Heritage Trail takes around 3-4 days and Langtang village about 5-6 days. You could also extend your time in the mountains after you finish by hiking from Meramchi back to Kathmandu.

This was a really well organised race with a ‘local’ feel – the finish line festivities were really something special. If you are keen on running and want to visit a lesser-trekked part of Nepal, this could be the event for you.