Michael Collins came to Nepal in 2013 and ran the Manaslu Trail Race. It’s been great to follow the antics of the people who came to that race since then – 24 hour races, 200+km challenges, Annapurna FKTs, and so on. Many expressed a wish to return to Nepal, obviously, because trail running here is awesome, and Michael was one who did just that this September. With an eye to a future Great Himalaya Trail crossing, he and a friend headed to a few places in Nepal this past September. I asked him if he’d write a short report on crossing the Ganja La, as there is scant information on the web about it. Attached are some GPS & Google Earth tracks too which might be helpful to give a rough idea where the track goes. Thanks for writing this Michael!

In early September my friend and I travelled to Nepal to fastpack/run the Langtang/Helembu and Annapurna regions. We decided we wanted to do something a little bit different rather than just hike on the popular treks so a plan was devised to travel on lesser known trails and not use a guide but rather play it by ear and use local knowledge along with GPS tracks to assist us. 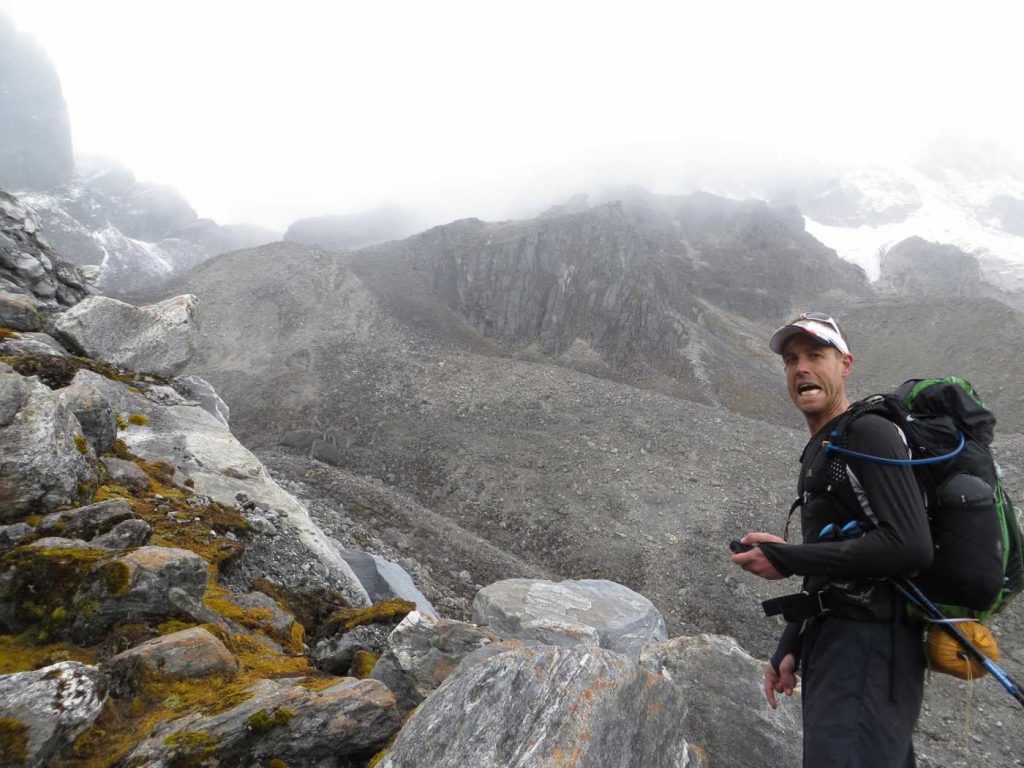 The basic route involved starting at Shivapuri National park and cutting through the park (via a side trip to the 2732 metre Shivapuri peak) to the Helmbu region, across Laurebina La and Gosakunda Tal to the Langtang trek where we arrived at Kyanjing Gompa. At this point the weather was very marginal [not good] but we decided to try the crossing of Ganja La as we had a GPS with a pre-loaded track on it. There were a few trails branching off from the trail up to the pass within the first two kilometres from Kyanjing so care was needed to make sure we did not go off trail. As we ascended the trail disappeared and instead we followed cairns over terrain covered with a combination of loose rock and snow. Past the high camp the cairns were very hard to spot and eventually led in a different direction to where we expected (we believe they were marking climbing route way to the summit) so we continued to follow the GPS. Throughout the climb we were mostly in heavily clouded/whiteout conditions so it made it impossible to spot the pass itself and it wasn’t until we climbed up a steep section with very loose rock that we stumbled upon it.

The descent on the south side was down very steep terrain again covered with loose rock and snow but it levelled out into a well defined path. We then followed this path and a spectacular night camping at 4200 metres amongst the mountains. The next day consisted of a lot of ‘Nepali flat’ before a long descent in a massive monsoonal downpour to the village of Timbu where we spent the night before taking a bus (4 hours) back to Kathmandu. 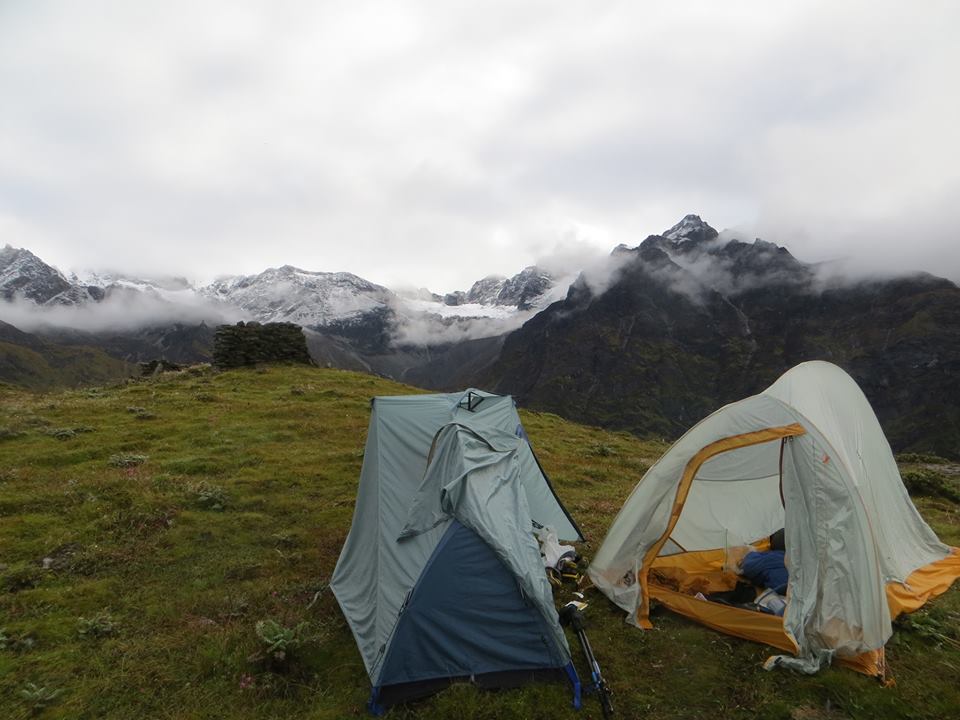 Camp just after the Ganja La

For photos in better weather, this is recommended from Cosely Houston who also climbed Naya Kanga.

The route over the Ganja La 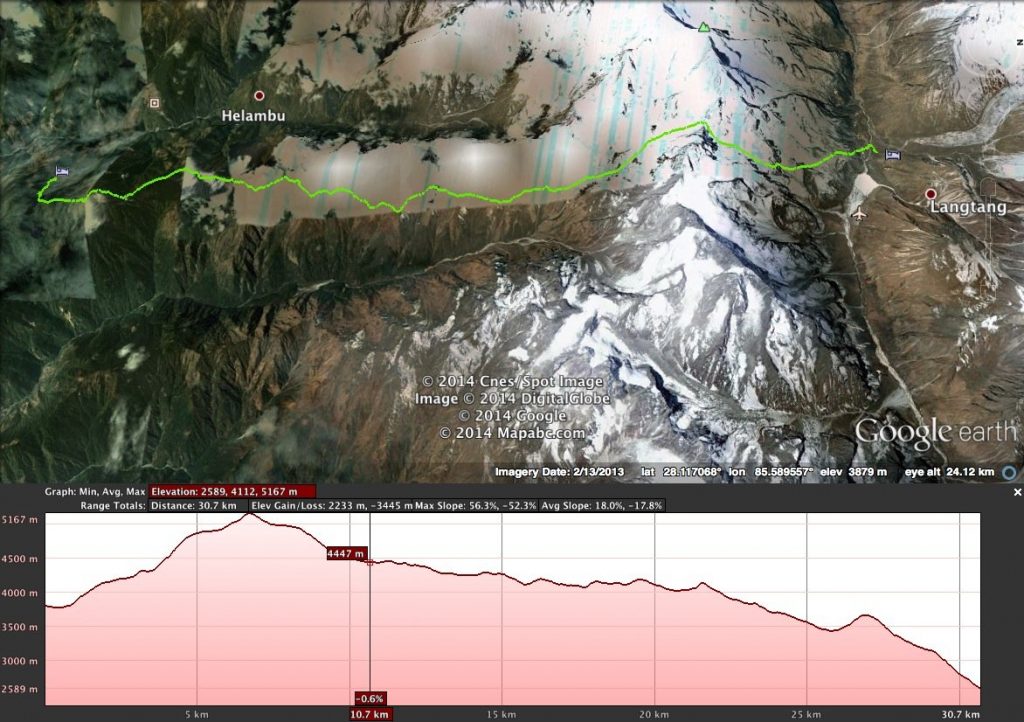 View of the pass from above!

GPS / GPX / KML files for crossing the Ganja La. Please note these come with no guarantee of accuracy

We met Michael when he came to the Manaslu Trail Race http://manaslutrailrace.org/ and he’s returned to the big mountains of Nepal a few times since to explore some new challenges. 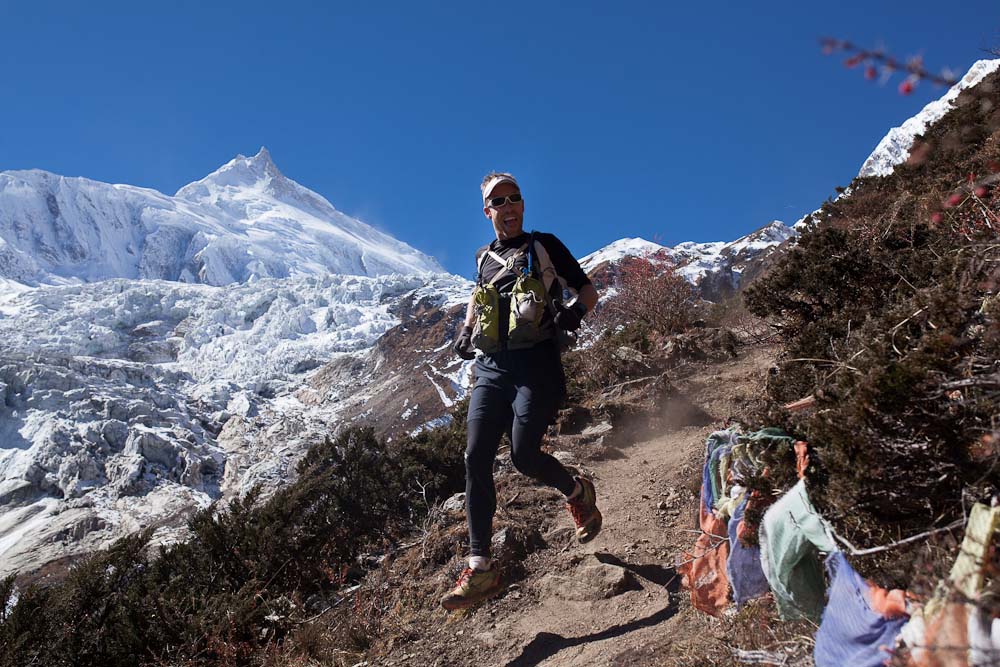